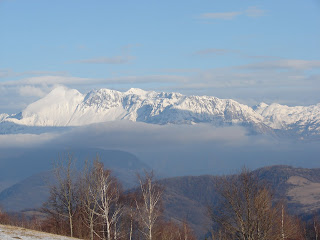 The last of winter fought hard rumbling the earth, throwing lightening bolts, covering the umbrellas with wet snow and screaming his dislike for being frightened away. 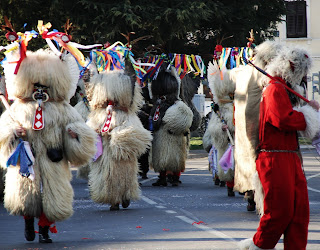 Spring came on Shrove Tuesday and the Kurent were here in Šempeter shaking their bells scaring the winter away. Pustovanje or Kurentovanje is the traditional pre-Christian Slovene celebration of the end of the cold and dark winter and the hope of spring. Many of the villages are nestled in valleys high in the mountains and the days are extremely short, the sun does not hit the house for long in the day and the darkness goes on forever. This year there was an excess of snow in the mountains [in some high altitudes 9 feet] and the celebration of spring was felt all around the country.

Pustovanje is now a community celebration with parades, gatherings in town centers, children dressed as every imaginable fantasy character [Pippilongstocking and Ninja Turtles seemed to be the favorites], floats expressing a political themes, and demonstrations by the Kurenti. 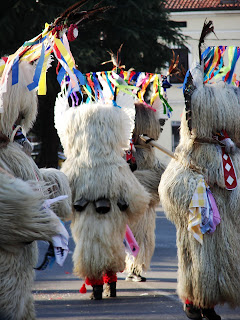 The Kurenti are traditional Slavic creatures who scare away the winter allowing spring to come. In the past they wandered around town from house to house scaring away evil spirits with the cow bells that hang as a belt around their waist.The Kurent costume is sheep's wool with furry head pieces decorated with horns, feathers, sticks and colorful streamers. The masks are elaborate folk art made of beautifully tooled leather and worn to completely disguise the wearer. The Kurenti came from the Maribor region in Eastern part of the country by bus to dance down the main street of Šempeter making lots of noise, hugging the girls, bouncing with them down the street, and generally creating joyful mayhem. 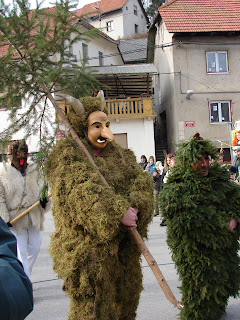 We also went to Cerknov for their celebration. Cerknov is a village in the mountains with a tragic history. During WWII there was a Partisan school in the town and Germans soldiers climbed the bell tower of the church with guns and butchered 40 young students as they were walking innocently on the streets. The isolated roads to Cerknov wind up, down and around the mountains through narrow passes where barely two small cars can travel. It took us more than an hour to get there for their unique celebration.

The characters in this village are Cerkljanski Laufarji, and the masks are typically worn by young men of age. 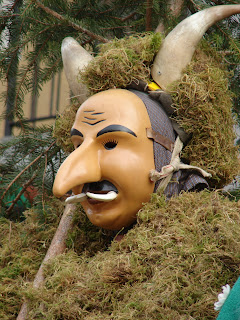 The central Laufar figure is Pust carrying a young spruce tree and dressed in a costume made of fresh moss scraped off rocks in the forest. He is accompanied by the family of 25 mute Laufarji in wooden masks and appropriate natural costumes. 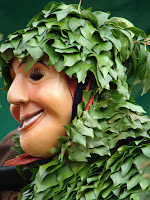 For months people of the village prepare the costumes and then the Larufarji parade around town and then gather on the stage set up in the center square. There for over an hour the problems of the past year are read and commented on by the judges. 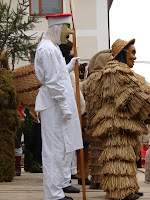 We could understand very little, and even our Slovene friends were having a difficult time understanding because the dialect was so different that it was often incomprehensible to them, but it was clear that the mayor [Župan] was getting a lot of attention and discussion about the road construction that is taking a life time also seemed to surface quite a lot. The Pust is blamed for all the problems of the year and is supposedly sentenced to death by a woodman's mallet. We missed the finale so I have no idea what happened to the masked moss covered man, but it simply became too cold to stand listening to the local gossip without being able to understand. We found a cozy cafe for hot tea while the rest of the community listened and laughed. 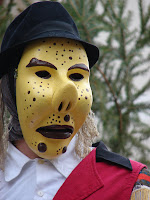 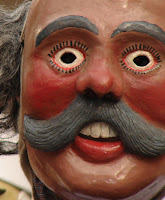 I adore these local festivals that evolved as a way of dealing with and understanding life. Once Christianity became the pervasive culture, the old cultures began to die or were absorbed into the Christian traditions [hence spring celebrations occurring on the Tuesday before Lent begins]. Christianity is the great leveler; everyone believes the same thing [although their are certainly an abundance of variations], all the holidays were dictated by the church [and now tradition] and the need for dealing with the natural world became suspect and viewed as pagan, evil, and now not modern. Because the U.S. was founded as a Christian nation only the native people have traditions of the »old ways«, it simply is not a part of our being, yet I feel the changes of the moon and the pulse of spring and I too want to don a costume and dance wildly in the streets.
Posted by kay raplenovich at 2:04 PM
Newer Posts Older Posts Home
Subscribe to: Posts (Atom)