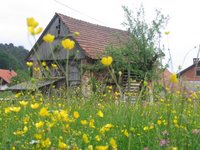 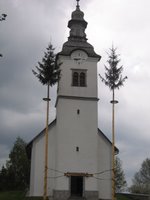 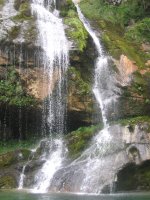 May poles at Three Kings Church

Bob snacking in an alpine meadow

Posted by kay raplenovich at 12:49 AM

Spring has been glorious in Slovenia. The season is welcomed the first of May with May poles and bon fires. The May poles tower above every town and village. A giant pine tree cut from the forest, stripped of its bark except the top branches which are left like a Christmas tree on the tip. It is then decorated with a hanging wreath of greens, ribbons and flags. Many of the poles look as if they are just stuck in the center square with wedges holding them in. I have no idea how they are tranported, lifted, secured or even why. There are usually bon fires and other celebrations of the day, but this year it was raining so hard that many things were canceled. Guess we will have to wait until next year to understand the traditions surrounding the beginning of spring.

The temperatures have been the coldest that anyone can remember, but the consequence of wearing sweaters rather than shorts in May is that the trees and flowers have stayed in bloom for such a long time. The air is amazingly sweet with air pockets that smell of rose, lilac, mimosa, lavender, jasmine and a mixture of wild flowering trees. I have never before experienced luscious fragrance in the air that stops me in my steps and turns my head. It is marvelous!

The fields in the country are sprinkled with wild flowers of all colors, shapes and sizes interspersed in the tall grass that is cut for the animals. The cows near the town are moved from field to field to graze within pastures that are bordered by a single fence of string. Why the string around the circumference keeps them enclosed I have no idea, but they do not seem to even be tempted to get on the road; too much yummy stuff to eat right where they are. The cows also are transported to the upper elevations for grazing. No longer are herds of cows lead up the winding mountain roads, but they are loaded in the back of a wagon and pulled up the mountain behind the tractor or hitched to the car. One Sunday we went for a hike on a gravel road and followed a trail of manure drippings that looked like we were following large birds. We were so very confused as to what kind of exotic creature was dribbling up this road when a tractor pulling a wagon of 2 cows passed us. The drippings obviously came from dairy cows that were scared to death of speed and steep slopes in such close confinement. Oh how I wanted to see them run free when they finally arrived at the summit.

The woods are lush with greenery and we are trying to spend as much time as we can walking the many paths around our area. Justi Carey, an British foreign teacher, and her partner Roy Clark have written a beautiful book describing many of the hiking paths in the Julian Alps. We hiked with them on one of their favorites paths though deep woods, wild flower meadows, to a giant spring that pours from the base of the mountain to form a reservoir for drinking water, past a water fall and all in the shadow of the highest ski slope in Slovenia. They even lead us through a tunnel built through the mountain during WWI with slots in the hillside for the guns and the echo of young men involved in a ridiculous war. Throughout these mountains is the presence of the WWI soldiers. They left caves, tunnels, roads, markers, and in some areas common items are still found deep in the woods. Unfortunately their unidentified bones were also left and now rest in common memorials on each side of the border.

The cuckoo bird accompanies us with a lonely call on all our walks, but other than a few hedge hogs we see very few other animals. There is still snow on the peaks in the upper elevations so the views and the vistas continue to be breathtaking and the air is cool with the dampness of the evaporating snow. The Slovenian people take great advantage of these hiking paths and we see many with their sticks and hiking boats enjoying a lovely Sunday afternoon.

Now that we have our Twingo we take drives in the evenings to find the sunset. Around each curve we find another gorgeous valley, mountaintop, or vista. I really think that the creator sculpted and painted every view with the intent to please those who wander here. From some of the upper levels the Adriatic Sea is visible in the distance reflecting the sun, and of course from the sea the mountains tower all around. Legend says that the Creator sculpted all the other countries of the European continent from a bag of geological wonders. When the continent was finished all the pieces that were left over were put together to create Slovenia. Within a drive of 2 hours the contrast of extreme beauty is overwhelming.

We have been so very impressed with the gardens in our area. They are a work of art. Everyone seems to have land set aside to grow potatoes, lettuce, tomatoes, peppers and lots of other yummy things. The gardens are pristine with straight lines and paths free of weeds. Early sour and then sweet cherries have been offered to us by our friends who have abundance from their trees, and lettuce by the bag full as well. We have done some planting also. We both were hungry to get our fingers dirty in the soil and create our own works of garden art. I planted window boxes with basil, sage, thyme, marjoram and hanging geraniums. Since every Slovene woman has the gift of flower boxes, I wanted to try my hand at building the skill [the trick is lots of water]. I didn’t think that the plants would grow so tall that we would have to peer through the pink flowers to nosey our neighbors, but it is fabulous to open the window and pick herbs for dinner. We have also planted corn, tomatoes and American pumpkins in a plot provided by Joško and Alida. The plants don’t seem to be doing very well, but we have enjoyed driving out to the countryside and work the land in the quiet of the evenings.

This spring has been like all others in my life with choir concerts to attend and participate in. We attended a concert of choirs in the hill top village of Tabor. Three out-of-door sites were set up for the audience and the choirs rotated between the sites. The singing was all a cappella and a combination of choirs. Many of the songs were sung in dialects with fascinating rhythms and harmonies. It was magical to sit in this ancient village listening to lovely singing with the stone wall as the acoustic shell, the declining sun setting the mood and the stars becoming the spot lights. Truly a moment to remember forever.

I have been directing 2 choirs at Šolski Center; one for students and one for women teachers, as well as giving voice lessons to interested students. We had a Concert of Song evening at the theatre in the new Sports building. The concert included 4 –6 songs by each choir, duets, solos and a couple of combined numbers. All but one of the songs was in English and we have worked all year on using American sounds rather than Slovene sounds in their English. In many of the songs no one would have known that these singers were not native speakers. There are some greatly talented singers with a real desire to sing things well. I have been creating arrangements all year for these choirs, which has been a wonderful creative outlet for me. I have really enjoyed making music with these people. It has helped to develop relationships that only exist with shared experiences and I am building lovely friendships with the teachers and the students. The students sang a peace round as the encore; their faces were leaning in anxious desire to do well and their voices soared in the hope for personal and collective peace. It’s amazing! Here I am sharing in this hope with young people of another land. We are doing our little part to build tolerance, understanding, appreciation and sharing this love through song. Tears of gratitude came to my eyes. I am so thrilled being a part of this journey and so honored that these singers have joined me.
Posted by kay raplenovich at 4:13 AM
Newer Posts Older Posts Home
Subscribe to: Posts (Atom)