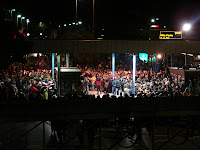 Crossing from Italy to Slovenia 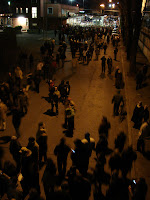 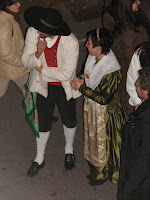 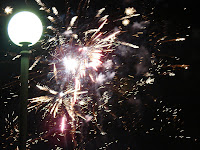 One of my friends said, “I can’t believe that the border is down. There have been border crossings for my entire life. It just seems impossible!”

The borders between Slovenia and Italy and Austria were officially opened on 21 December when Slovenia became apart of the Schengen border-free area. At one minute past midnight lights were lit by Slovene and Italian officials together on both sides of the border, bands played, costumed citizens danced and fireworks lit the night sky. We stood on the bike path on the old railroad track that had served as the border between the two countries since 1947 and watched the celebrations on both sides. After the official opening and dismantling of the crossing gates, masses of people walked freely between the two countries, for the first time, without document checks.

This border was more than simply the line dividing two nations, but it also was the division between people of the same culture. Gorizia, Italy was once a city of Slovene majority. After WWI the city of Gorizia and the region of Primorska were annexed to Italy and the Italians began to bring citizens from other parts of the country to Gorizia for work and to increase the Italian population. After WWII Primorska was returned to the Slovenes [at the time Yugoslavia], but Gorizia remained Italian. Nova Gorica [new Gorizia] was birthed from a field of roses so that the Slovenes could live in Slovenia and not have to live any longer under the ruling of the Italians. Some people could not leave their families, their businesses, their farms, their houses and had to stay in Italy. The border separated them from family and friends and even some farmers had vineyards in Goriška Brda, Slovenia and Colli Orientali del Friuli, Italy straddling both countries.
One friend tells of hearing the bells tolling for the death of his grandmother in Italy, but none of his family was allowed to cross the border to attend the funeral. Another tells of smuggling meat across the border with her mother, as a young girl, in hopes of earning some money by selling it to Slovenes in Italy. And a popular story is a day when the border was opened without stipulation and people went in mass to visit family and friends in Italy, each returning with a broom slung over his/her shoulder; a commodity more precious than gold.

Prior to 21st December everyone had to show documents when passing to the other country and there were certain borders for locals and borders for all others. Because we do not have EU passports we could only pass at the international crossings even if we were walking or riding our bikes. Now because of the free borders we can cross into Italy just 2 blocks from our apartment.
This celebration was the biggest Schengen opening and creates a 24-country area where EU citizens can travel without passports. In addition to Slovenia , Estonia, Hungary, Latvia, Lithuania, Malta, Poland, Slovakia and the Czech Republic also joined the Schengen.

To stand and watch the excitement and feel the energy of breaking down barriers was a thrill. Although our friends here have experienced other moments in history it is seldom that I have been able to feel the breath of change hot on the back of my neck.
Posted by kay raplenovich at 8:07 AM
Labels: Schengen area
Newer Posts Older Posts Home
Subscribe to: Posts (Atom)